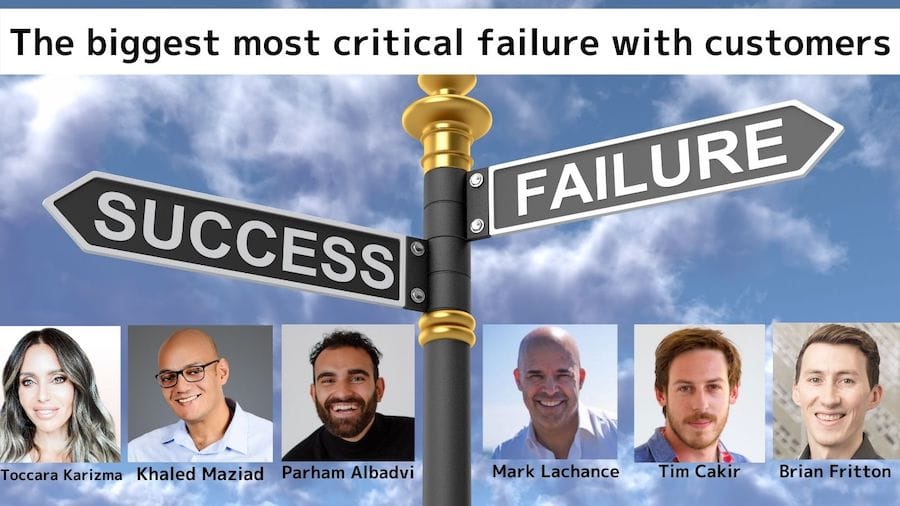 One of the most popular questions on my REACH OR MISS podcast for entrepreneurs is the question about the biggest, most critical failure with customers.

I invested in a rather expensive online course to study how to create my successful course. I learned every aspect of creating the course, and I studied four different ways to promote my course. The expert I learned from about creating an online course had a very clear recommendation about promoting the online course: he warmly recommended not using webinars to promote and sell my course. Webinars are too complicated, he said, and you should use a better, easier way to sell your course. But I didn’t listen.

I listened to another mentor who was a great believer in webinars.

You got it right; my webinars were a total failure, and although I tried again two years later, I didn’t manage to use webinars to sell my course.

The reason for my failure: I didn’t focus on the one most important challenge of selling my course. Instead, I wasted a lot of energy and time learning how to make webinars.

It took me a while, and I found a different successful way to sell my courses. But this was a fundamental lesson for me.

In today’s episode, I chose to focus on the stories of six successful entrepreneurs who shared with me the stories of their biggest failures and what they learned from them. Failures are an excellent opportunity to learn. Don’t be afraid to fail; dare to win!!

He shares his story on struggling to give away his stuff for free to charging high-ticket offers and helping his clients from all around the world do the same.

He is known as the Copy & Messaging Alchemist. He has been featured in FOX as one of 21 Entrepreneurs You Need to Know About in 2021.

He has also been featured in ANLP, Fox, CBS & NBC. Khaled is a professional member of ANLP International CIC, a certified Master of NLP, and holds a degree in Civil Engineering.

Before becoming marketing, Khaled worked with traders and professional fund managers, helping them master their mental edge in trading and life. He also had over 15 years of experience as a Project manager, where he managed multi-million dollar projects on 3 continents.

Khaled lives with his wife and two kids in Sydney, Australia.

Having built her own successful eCommerce business back in 2007, Toccara is now considered one of the world’s top eCommerce marketing experts. Her out-of-the-box approach to digital marketing and expertise in the online business growth space is why I’ve asked her to join me today.

I love working with conscious entrepreneurs – people who share my values and vision for the world. Clients that I feel energetically aligned with, and who believe in making profit and impact.

That’s why together with my partner, I founded Mocho and Co, the first full-service digital agency exclusively for conscious businesses and disruptors.

I’m committed to helping businesses of all sizes realize Fred Kofman’s vision of businesses “conscious of inner and outer worlds… taking into account body, mind and spirit in self, culture, and nature.”

But we can’t do it alone. We need a vibrant community of conscious, aligned entrepreneurs – people like you, who know their skills are better served somewhere else… somewhere they haven’t found yet.

Mark is currently the CEO and lead investor of Maxy Media Inc., one of the largest TikTok, Facebook, Snapchat, and Google Display Network performance marketing agencies in the world. Currently, Maxy Media is the number one advertiser in terms of monthly spend on the TikTok platform in Canada and top ten in North America.

In 2016, Mark successfully sold EVO Payments International Canada, an end-to-end payment solutions provider and merchant acquirer which he founded in 2009. He guided the company from its inception with one employee to over 200 employees across Canada.

Prior to founding EVO, Mark was one of the founding members and president of VersaPay Inc, a payments solutions provider, which was taken public in 2010. Before joining VersaPay, Mark was a founding member of Pivotal Payments, which is now a multi-billion-dollar public company. He helped set the foundation and drive the company’s sales and revenues before his successful exit from the company in 2006.

Mark has made several other highly successful investments in various industries such as payments, cryptocurrencies, marketing, nutrition, fitness, and sports. Over the past twenty-five years, he has invested in and consulted for dozens of other ventures, which have resulted in highly positive returns.

Mark speaks and travels the world with his wife, Sonya, and their two boys.

Brian has built products and led engineering, design, and IT teams at companies with credentials such as Fortune’s 500 Fastest Growing Companies, the Inc. 5000 List, and Entrepreneur’s 100 Most Brilliant Companies.

Working with 17 startups to date, some of his best achievements include helping two startups receiving 1.7 million euros in Horizon 2020 funding, increasing MRR of one startup from $80k to $300k in less than 18 months and completing projects such as implementation of OKRs, building company dashboards, rebranding and product launches.

In addition to that, Tim’s passion for helping people realize their potential to bring their ideas to life means that he also teaches Bachelor and Masters programs at two universities in Barcelona, ESEI International Business School Barcelona and Geneva Business School.

The best ways to connect with Khaled Maziad

The best ways to connect with Toccara Karizma

The best ways to connect with Parham Albadvi

The best ways to connect with Mark Lachance

The best ways to connect with Brian Fritton

The best ways to connect with Tim Cakir