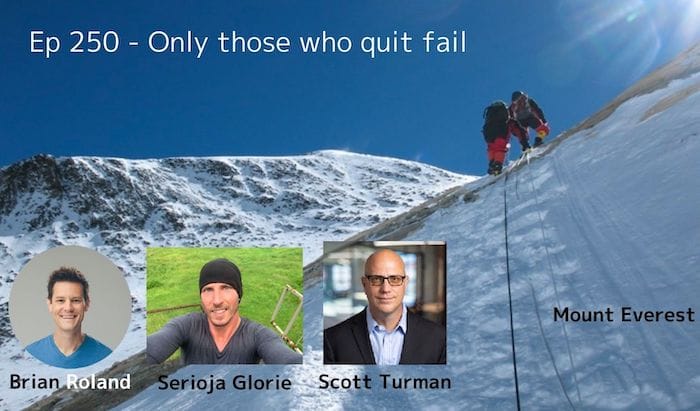 There are a few reasons why so many entrepreneurs fail, and around 90% of the entrepreneurships fail. However, many of the most successful entrepreneurs I interviewed for my podcast told me the same thing; Keep going. Only those who quit fail.

In today’s episode, I chose to focus on the stories of three successful entrepreneurs. The main reason for their success was their state of mind; no matter what happened and how big the failures they experienced were, they never ever gave up until they succeeded.

I think you will find those stories very inspiring.

Brian Roland is a Social Entrepreneur and Founder of Abenity, the 6x Inc. 5000 Company that’s powering corporate perks for top brands including U.S. Bank and MasterCard.

And while Abenity provides millions of subscribers with private discounts, the company’s social mission is fighting extreme poverty with every program they deliver.

Abenity recently exceeded a million dollars of total giving and hired a CEO to accelerate growth with their fully remote team.

Brian lives in Scottsdale with his wife and 3 daughters and is investing his time in efforts that help like-minded entrepreneurs establish a social mission of their own.

Serioja Glorie is an enthusiastic Serial entrepreneur. He has a wealth of knowledge on e-commerce that can be quite beneficial to every business owner.

His automation service journey started because of his personal success & demands by others to tread similar paths that yield positive results. He broke a lot of barriers and utilized an ever-evolving landscape that has helped to grow and establish a new formula.

Serioja has launched the first Multi-Market Automation Service and thereby proferring solutions to problems that are encountered by entrepreneurs.

Scott Turman is an IT expert and entrepreneur that has been writing code and cryptographic systems for the last 25 years for the likes of NASA, the Department of Defense, Disney, and other Fortune 500s. He is the founder and CEO of BrightRay Publishing, an all-in-one writing and publishing service for busy entrepreneurs like himself. He lives in Florida with his wife and son.

I hope you found these stories inspiring. Whatever you are going through, I wish you always find your way to win.

The best ways to connect with Brian Roland

The best ways to connect with Sergei

The best ways to connect with Scott Turman