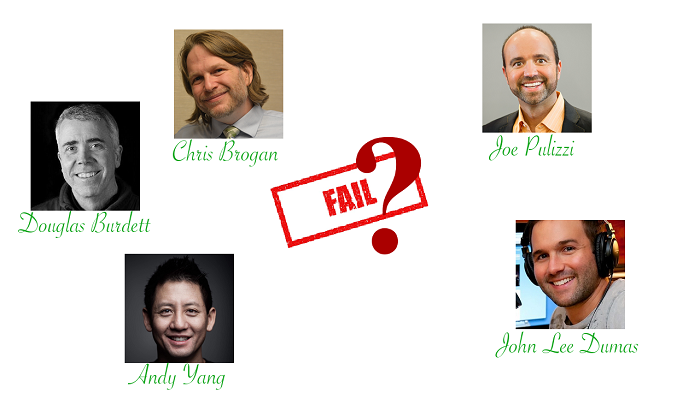 John Lee Dumas, Chris Brogan, Joe Pulizzi & more share their biggest entrepreneurial failures with customers, and they’re all talking about the same mistake: “Going with what I thought is the biggest problem, instead of listening to customers”.

Hello, Reach or Miss listeners. It’s has become almost traditional to have a special episode every now and then focusing on a major issue that was mentioned a lot on the show and has an impact on many entrepreneurs.

Last time I chose to speak about the best advice our interviewees shared with us. Today, I would like to talk about failures with customers. During the interviews, I ask every guest to share their biggest most significant failure with customers, the one that affected their journey the most. There is one thing that popped up in most of the interviews and that is the role of that big failure leading to huge remarkable success.

I’ve chosen 5 successful guests whose failure stories are the most inspiring and helpful to you, our listeners.

The biggest failures with customer

The first failure story is the story of Joe Pulizzi. Being one of the first to recognize the coming change and the power of content marketing, Joe was trying to develop the first Matching Machine.

Joe Pulizzi is founder of Content Marketing Institute, a UBM company, the leading education and training organization for content marketing, which includes the largest in-person content marketing event in the world, Content Marketing World. Joe is the winner of the 2014 John Caldwell Lifetime Achievement Award from the Content Council.  Joe is the author of four books, including his latest, Content Inc.  His third book, Epic Content Marketing was named one of “Five Must Read Business Books of 2013” by Fortune Magazine. You can find Joe on Twitter @JoePulizzi. If you ever see Joe in person, he’ll be wearing orange.

Douglas Burdett is founder and principal of ARTILLERY, a business-to-business marketing agency in Norfolk, Virginia, and is the host of The Marketing Book Podcast, which was named by LinkedIn as one of “10 Podcasts That Will Make You a Better Marketer.”

Prior to starting his own firm, Douglas worked in New York City on Madison Avenue for 10 years at ad industry giants J. Walter Thompson and Grey Advertising.

Before starting his business career, Douglas served as a U.S. Army artillery officer in Germany for three years and then earned an MBA.

Douglas’s biggest failure with a customer

John is the host of EOFire, an award winning podcast where he interviews today’s most successful entrepreneur’s 7 days a week. JLD has grown EOFire into a multi-million dollar a year business, with over 1500 interviews and 1.5 million monthly listens. He’s the author of The Freedom Journal and The Mastery Journal, two of the most funded publishing campaigns of all time on Kickstarter. All the magic happens at EOFire.com!

Chris Brogan provides strategy and skills for the modern business. He is CEO of Owner Media Group, a sought after public speaker, and the New York Times bestselling author of nine books and working on his tenth.

Forbes listed Chris as one of the Must Follow Marketing Minds of 2014, plus listed his website as one of the 100 best websites for entrepreneurs. Statsocial rated Chris the #3 power influencer online.

Chris lives in northern Massachusetts. He is married to Jacqueline Carly; between the two of them, they have three kids.

Andy Yang is the CEO of 500px and an advisor with MaRS’ Consumer & Commerce cluster. He has spent more than 15 years in technology as an investor (angel and institutional), banker, consultant, and advisor. Currently, Andy is CEO of 500px, a premium photography community funded by Andreessen Horowitz, Harrison, Metal, and ffVC. Previously, he was an investor at Extreme Startups and a venture capitalist at Relay Ventures.

You probably noticed that most of the opinion leaders that shared their failure stories with us, started their answer by saying, “Oh, there were so many failures, and mistakes…”

Everything is changing, all the time. And in this hectic, ever changing world, we all make many more mistakes and have many more failures.

However, one thing hasn’t changed (yet), and this is the way people think, evaluate, and decide. This is a very important issue to remember while focusing on our customers. They have the answers. Because the money we look for is in their pockets. And that goes back to the best advice of these clever opinion leaders – Talk with your customers! Do something that doesn’t scale and talk with them. There are the answers.

So thank you for listening for today’s special episode. Next week, we will go back to interviews with new guests.